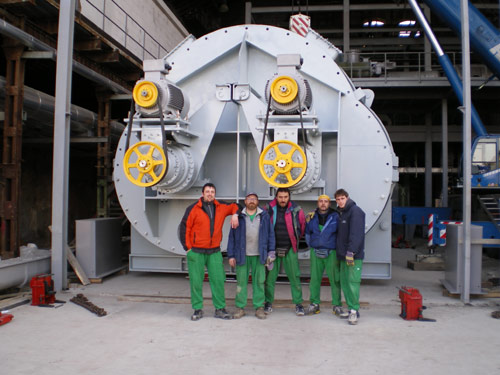 Our company has longterm experience in moving heavy loads as well as in moving machines. references speak for quality of our services and our reliability. When moving heavy loads, we always use the latest technology, cranes and machinery. Your devices are always safe and under supervision of our professionals while moving.

We work continuously for eight years for the client Valeo Praha, Ltd. in Žebrák. Our most interesting work was moving new smelting furnaces that were shipped from Japan. One oven weighed about 30 tons and was 60 meters long. Our task in this was to compile these furnaces into the production line.

HM, s.r.o. is another company who uses our heavy loads moving service.

We performed the moving and installation of boiler room in Slavia football stadium and relocation and installation of boilers and air conditioning units of Skoda Palace. We have no problem with moving presses for plastic bottles weighing 40 tons. In the company Odkolek we did move the furnace while making new floors. We're moving, for example, presses and dryers. These loads are over 10 tons, and move through the chassis. We will provide all the necessary machinery, equipment and technology that is needed for moving them.

We are ready to move all your heavy equipment in our company JUMBO stehovani.

Power station Ledvice lies at the foot of the mountains Krušné hory near the town of Bílina and Teplice in Bohemia.

During moving process were carried out the following tasks: